Hmmm, what to write? I got nuttin' right now. It's almost time to get off work and I am excited about that!
Posted by Amy at 3:44 PM No comments: 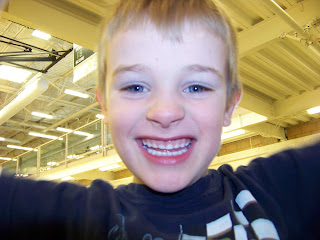 Jake, he's such a snuggly, happy, sunshiney boy! He's always in a good mood and can always make me laugh. He is always dancing and singing to his own little tune. I love it when I pick him up from school and he runs to me saying "Mommy, Mommy!" and gives me the hugest hugs. He's always willing to share anything he has and is happy to do it. He'll randomly walk up to Rob and I and ask us he if we need a hug and give us one or two or five!
Posted by Amy at 11:04 PM No comments:

So Saturday Jordyn had an 8 am basketball game, yuck! That was the last 8 am one, though. She is doing so well, I'm really proud of her. When I got home from the game Rob told me the grandparents called and were coming down and we were supposed to meet at Chuck a Rama. Rob met the grandparents and brought them to Max's game and they were able to see the last half and Max made a few baskets while they were there!

Sunday was kind of a lazy day. I didn't feel well, so we didn't go to church. Rob took the kids to see Tron while I stayed home. It was really weird to be home all alone on a Sunday afternoon!

Monday Rob and I took the kids for a walk on one of the trails here in town. It was fun. We heard some frogs down by the river, but didn't see any. We had the kids do some races, trying to wear them out a little bit. I don't know how well that worked! Not too long after we got home it was time to meet Jan and Ruth on the Red Hill to hike with them. Jake was all over the place, the little stinker! I finally threatened him with not coming again and he finally decided to stay close to Aunt Ruth. After our walks Jordyn rounded up her friends and filmed her film for her Reflections project. I haven't seen any of it, we'll see how it ends up. Next weekend I need to sit down with her and show her how to edit it.

A boy and his dog

Buster. What can I say about Buster? Buster is an awesome dog. I don't know what we'd do without him. He came into our lives by accident, just when we were actively looking for a dog. He is such a good boy, very lovable and protective. We all love him, but Max has a special bond with him. He'll sit with Buster for quite a while, just talking to him or petting him, making sure there is nothing on his fur. The other day Max was laying on the floor with his head on Busters chest, reading a book. They both looked so happy. I know I took a picture, but couldn't find it. I'll have to post it another day. Max tells me all the time, Mom, when I grow up and have my own house if you don't want Buster anymore I'll take him for you. I'll even pay you for him! I tell him we'd just let you take him, buddy. I just told Rob today that Max shows more affection to Buster than he does to us!

I added in the pictures of Konner and Kirsten (my cutie pie nephew and niece!) to show that Buster is so gentle with all kids, especially babies. He let Konner crawl all over him. When he gets sick of it he just gets up and goes somewhere else.

I have to add that when we are gone for extended periods of time Buster will get one of everyone's shoes out of the cubby and string them across the house. He doesn't chew on them, I think he just likes them around so he can smell us. Oh, another good Buster story. One night Rob called me at work and told me that Jake had fallen asleep on his bed pretty early, about 5:30 or 6:00 and was all covered up with his blanket. Buster wandered all around the house like he was looking for someone and wouldn't settle down. Then wanted to go outside but then wanted back in pretty quickly. Rob figured out that he was probably looking for Jake, so he took Buster in the boys room, uncovered Jake to show Buster and he immediately settled down to relax because he knew where everyone was! I've also noticed that if I'm in my bedroom cleaning or watching tv for extended amounts of time he'll come looking for me, when he finds me he just wanders off to check on someone else. I love that dog! 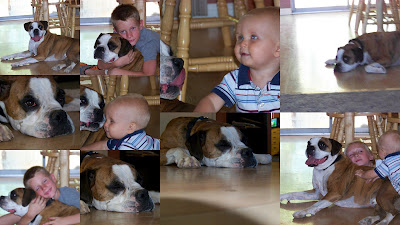 At Jordyn's basketball game last week Jake decided to wander off. I lost track of him for a good 20 minutes. I was about ready to have a heart attack! I notified the staff at the Community Center to help me look for him. A staff member found him in the next gym. I haven't been that scared in a really long time. He was not happy with me when I made him sit next to me the entire time at Max's game a few hours later!

These pictures were all taken during Jordyn's game. He LOVES his picture taken. Whenever the camera comes out he is a cheese'n fool! During half time I had him running from me to the wall over and over in the hopes of getting some of his energy out, but that didn't work so well! 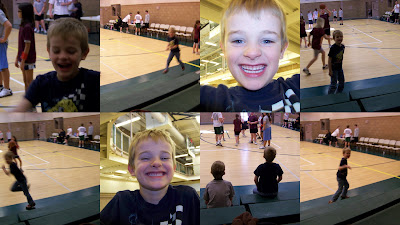 I guess I didn't take as many pictures at Jordyn's game as I did at Max's! I'll have to make sure to take my camera next time and get a few more of Jordyn. She is really enjoying playing and is getting very good. She has made quite a few baskets for her team! When I first signed her up I thought she was just wanting to play because Max was playing something, but I figured out that that is not the case. She is really liking basketball alot more than soccer. 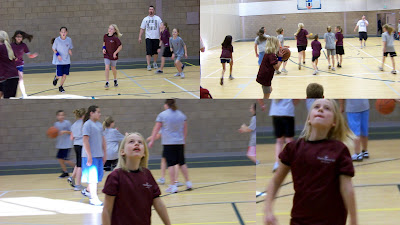 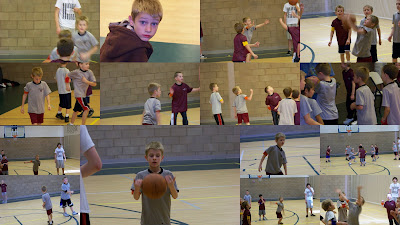 Max and Jordyn both had basketball games today. They are having a really good time and it's fun to watch them. (I've enjoyed watching the basketball games more than soccer!) Max is pretty obsessed with basketball and he is really very good at it! I'm really proud of him.

I will post a collage of Jordyn's game tomorrow!

psst! you can click on the collage to make it bigger to see the pictures better! 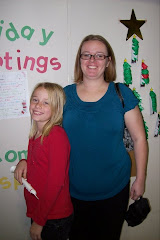